Whether you’re upsizing or downsizing, any move is sure to have a connection with starting a new life chapter. For the Whalen family, their latest move in June 2020 was definitively a big change. Things were starting to get cramped with seven people in the house, and it was time to increase their square footage. Along the way, Colt Moving helped make the transition as smooth as possible. 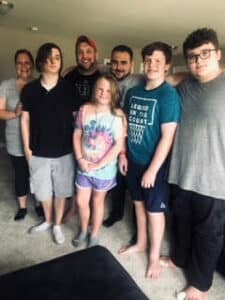 Like many homeowners, Brandon Whalen had gotten used to the idea of managing moves on his own. But his last move was different. Back in 2018, Brandon and his now-current wife wereliving in an 1,800 square-foot home with Brandon’s three boys and her two young children. Fast-forward to 2020, and space was feeling a little too tight.

The first two steps were relatively simple. The Whalen’s were able to sell their house to someonethey knew who was moving to Indiana from Texas. Even better, the Whalen’s were able to move within Westfield. After living on the westside of the city, they found the perfect new home just over on the eastside—and at 3,600 square-feet, it’s double the size of their previous home with plenty of room to spare.

Everything seemed to fall into place. However, it was clear that moving with a big family—and everyone’s belongings—was going to be more complicated than ever before. Brandon needed to rethink their moving process. And that in itself was strange.

“I’d never used a moving company in my life,” said Brandon. “I’m an old-fashioned guy. I’ve got a truck, so we’ll do 19 trips or get a U-Haul, that’s always been my experience.”

To make matters worse, other people’s stories about moving companies only ever involved “nightmares and the problems.” Despite all of that, the Whalen’s decided to follow-up on the one good recommendation they had heard. Because they were moving to such a bigger house, they still needed to “take the leap.”

The realtor they were working with mentioned Colt Moving and said, quite simply, “If you’re going to hire movers, these are the guys to use.”

With their realtor’s insight, the next step for the Whalen’s was to give Colt Moving a call and forget the DIY moving. Fortunately, everything continued to go well for them. Brandon’s wife learned upfront what Colt Moving’s cost per hour was going to be, and they went forward with scheduling without reaching out to any other local moving companies.

On moving day, they had hired two professional movers with one truck. The kids were away, so it was only Brandon and his wife in the house. When the movers first showed up, Brandon said that he was actually trying to help them out. One of the movers even had to remind him to sit down or get a drink. The movers had everything under control, and they were friendly too.

“It was exemplary—they were engaging me and asking me things,” said Brandon. “But they didn’t stop. They were moving as we were talking. They were hustling.”

At one point, though, the movers did have to pause and talk with Brandon about the dresser upstairs. “They were okay with it being heavy,” said Brandon. “But it’s not an easy piece of furniture to move.”

Rather than try to force something and then stop and say sorry after, the movers wanted to check-in at the start. “They just wanted to make sure we’d be comfortable if they ended up making a ding,” said Brandon, “and that absolutely meant the world.”

How Did the Team Do?

The Whalen’s experience with Colt Moving ended up being nothing like what their friends and family had gone through with other moving companies. The other feedback included stories where the movers seemed to take forever and weren’t organized. Plus, some people even felt thattheir moving companies weren’t being sensitive to damage, and that the movers weren’t treating the furniture carefully.

Brandon quickly saw that Colt Moving was different. “These guys knew what they were doing, like they already knew the layout of that house.”

The movers even took the beds apart for the Whalen’s and then put them back together in their new home. To manage the couches, they took the legs off. There wasn’t even a problem moving that upstairs dresser. The movers communicated well, and that made everything pretty simple.The straightforward invoice was also helpful. The movers showed Brandon the time they clocked, and then he wrote the check right there. After that, everything was done.

“I wouldn’t take anything away from the experience,” said Brandon. “It was actuallyoverwhelming—how comfortable and easy it was to trust them to get the job done.”

Final Thoughts About the Move

A low-stress moving day isn’t always possible, but it certainly gets a lot easier when you have a good team of professional movers helping you out.

“I am not ever going to DIY move again,” said Brandon. “Ever. It will be Colt Moving.”

During the move, Brandon said he kept finding himself thinking, “They are earning every single penny that they are getting.” Overall, the day was a big success. The Whalen’s are happily settled in their new home—and they’re always ready to refer Colt Moving to other families moving around the Indianapolis area.